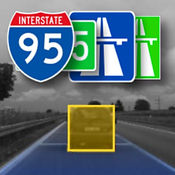 【软件功能】
Are you often going for longer trips on highways or country roads, or are you stuck in daily stop-and-go traffic? The
【基本介绍】
The original Augmented Driving app available since its first acclaimed launch early in 2010

【软件功能】
Are you often going for longer trips on highways or country roads, or are you stuck in daily stop-and-go traffic? Then you do not want to miss the impressive technology of Augmented Driving 4.0 to support safer driving:

# Safety Score:
- Real-time evaluation of your driving based on distance to other vehicles, lane keeping and speed
- From poor driving (0%) over normal driving (50%) to perfect driving (100%)
- Tap on &quot;course&quot; and &quot;safety score&quot; display to toggle, double tap to reset

# Vehicle Detection and 2-Level Safety Distance Monitoring:
- Vehicles in front of you and on neighboring lanes are detected and dynamically highlighted
- A close-up view zooms in on the relevant vehicle
- Relevant information, such as vehicle distance and time gap, is displayed in the HUD
- User-adjustable 2-level distance warning

# Lane Detection and Lane Departure Warning:
- Your own lane is highlighted with dynamic overlays in the augmentation video display
- The width of your lane and your distance to its borders is indicated
- As soon as you cross the lane markings you are informed by an acoustical signal

# Stop-and-Go Assistant:
- If you come to a dead stop in stop-and-go-situations, Augmented Driving detects moving off traffic in front of you and issues an acoustical information

# Speeding Avoidance:
- To avoid speeding you are warned when a user-defined speed-limit is exceeded

# Visual Logbook and Video MP4-Recording:
- Take screenshots manually or by enabling the intelligent, situation-adaptive automatic recording feature
- On iPhone 4S/5, save the video screen contents as a full MP4 video stream including a buffer of the past 5 seconds
- Videos and screenshots are stored in your photo album

# Information HUD:
- Relevant status and driving information such as your current speed and driving course are overlaid to the augmented video display

# Sound and Voice Output:
- Acoustical warnings can be configured to be a standard sound or an appealing voice output
- Multi-language voice output in English (voices for US, UK), French, German, Spanish, Italian, Japanese and Chinese 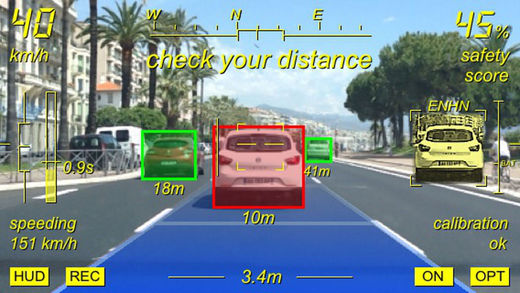 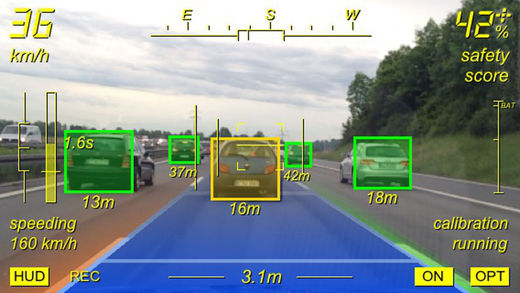 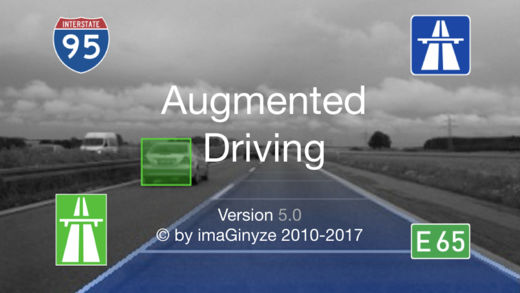